Events past and present 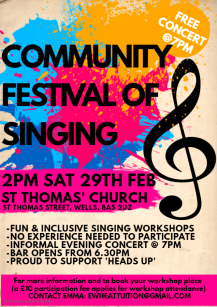 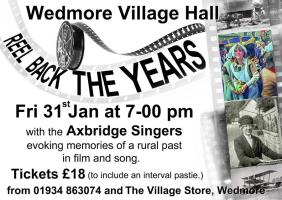 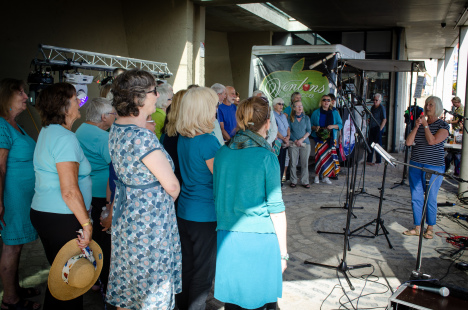 Following our successful debut at the Lyme Regis Folk Festival in 2018, we were invited to perform again this year. Once again the weather was glorious, making the fabulous setting and atmosphere of the event even more special.

The choir performed twice, allowing time to explore, relax and enjoy the music and sea.

As with the last night of the Proms, our repertoire included some Sea Songs (‘Mingulay’, ‘Oh I do like to be beside the Seaside’, ‘Risk’), as well as some old favourites (‘Planting Trees’, ‘Keep you in Peace’, ‘One day like This’, ‘Tea and Buns’). Brown Eyed Girl had its first successful performance.

‘Where did you get that Hat’ was very well- received and the lead singers did a tremendous a job, as did the three Breton Sailors (Tony, David and Trevor) in Tri Martolod. Both songs showcased the dramatic talents and inventiveness of the choir.

Soloists, Amanda and Jane sang beautifully and skilfully on their own solo performance on the seafront stage, where the audience was hugely appreciative.

Thank you to Amanda and Stella for organising the day and the programme, and to Sarah for arranging the transport.

We began our singing with ‘Good Day Sunshine’, which lifted spirits since the fete was relocated in the church and Town Hall due to the current British monsoon!

The theme this year was HATS so we proceeded with an interactive arrangement by Sarah Kendall of ‘Where did you get that Hat?’. The choir brought a range of hats – bowlers, straw hats, mortar board, Arabian headwear to use as props for the chorus:

I once tried hard to be PM, but failed to get elected
Upon a tub I stood and said “what shall we do with Brexit?”
And I had dodged the milkshakes (which was no easy task)
When one man cried, 'A question I the candidate would ask'

SPOKEN: 'Sir, thousands of British working people are anxiously awaiting enlightenment on the subject on which I am about to address you. It is a question of national importance, in fact, THE great problem of the day, and that is, sir...

The song was much appreciated, bringing joy and laughter to the afternoon.

‘O Waly Waly’, ‘Come again Sweet Love’ and ‘I got Rhythm’ were given their first performance, followed by favourites such as ‘Wise Men Say’, ‘Tea and Buns’ and ‘Ipharadisi’.

A procession, singing Dona Nobis Pacem, opened a bold and ambitious evening, tracing a line from the first World War to the present. The evening was a seamless tapestry of music, readings and visual images, rooted in the socio- economic contexts of past conflicts, and written by a group of Axbridge people, including our very own David Parkin. Performed in two halves by a team of volunteers from the local community, and to a full church, the first half focussed less on the devastation of war itself, but rather the aftermath – globally, nationally and locally.

The second half was a reflection and celebration of peace and peacemakers. Two songs by the choir portrayed the preciousness of peace: ‘Shalom Aleichem’, a gift from our friends, the French choir ‘Cantagarrigue’, was rewritten in English for the evening. ‘Child with Dove’, composed by our choral director, Stella Moore, ended the evening with a message about the fragility of peace, and was inspired by the Picasso painting. Participation in the evening was a great joy and it was a privilege to contribute to the message of peace – an important mission for everyone.

Visits from Dan Landrum and Aaron O'Rourke from Tenessee and Cantagarrigue from France, May 2018 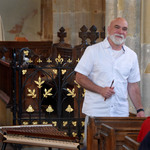 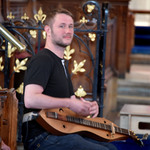 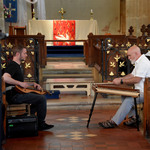 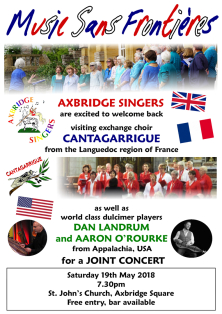 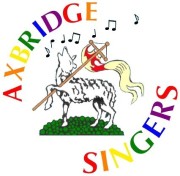 During the lockdown we set an artwork challenge: for members to produce a square picture inspired by any of our songs from the last 15 years. This calendar and these bags are the result - and they could be the perfect local Christmas present!

Cost: £8, payable in person or online. All profits will go to the Cheddar Valley Food Bank.

While the choir is unable to meet, we are using the website 'Zoom' to hold weekly practices - see instructions in the Members' Area if you would like to find out more.

Also in the Members' Area:

There is also a Sing-Along page with lots of our favourite songs on, and a 'choir chat' page where you can reminisce....

If you are feeling brave, there are also video tutorials on reading music!

Please keep in touch with each other, stay safe, and we look forward to singing together again as soon as we can.

Recommend this page on: